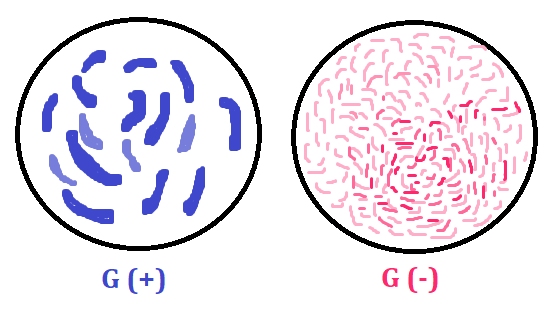 1) Gram positive bacteria have a thick peptidoglycan layer and no outer lipid membrane.

3) Gram negative bacteria appear a pale reddish color when observed under a light microscope following Gram staining. This is because the structure of their cell wall is unable to retain the crystal violet stain so are colored only by the safranin counterstain. Examples of Gram negative bacteria include enterococci, salmonella species and pseudomonas species.

4) Gram positive bacteria have a distinctive purple appearance when observed under a light microscope following Gram staining. This is due to retention of the purple crystal violet stain in the thick peptidoglycan layer of the cell wall. Examples of Gram positive bacteria include all staphylococci, all streptococci and some listeria species.

In nature, and in many medical situations, colonies of bacteria construct and live in a biofilm, made up principally of capsule material. A biofilm usually consists of a mixture of bacteria living in a matrix of slime which is secreted by one of the bacterial members. Dental plaque is an example of a natural biofilm, as is a slimy mass of bacteria attached to a rock in a mountain stream.

1. Biofilm formation begins when free-floating microorganisms such as bacteria come in contact with an appropriate surface and begin to put down roots, so to speak. This first step of attachment occurs when the microorganisms produce a gooey substance known as an extracellular polymeric substance (EPS)

EPS: is a network of sugars, proteins and nucleic acids (such as DNA). It enables the microorganisms in a biofilm to stick together

2. Attachment is followed by a period of growth. Further layers of microorganisms and EPS build upon the first layers. Ultimately, they create a bulbous and complex 3D structure. Water channels crisscross biofilms and allow for the exchange of nutrients and waste products.

3. Multiple environmental conditions help determine the extent to which a biofilm grows.

4. Finally, the cells within a biofilm can leave the fold and establish themselves on a new surface. Either a clump of cells breaks away, or individual cells burst out of the biofilm and seek out a new home. This latter process is known as "seeding dispersal".

WHY FORM A BIOFILM?

1. For microorganisms, living as a part of a biofilm comes with certain advantages. "Communities of microbes are usually more resilient to stress".

2. Potential stressors include the lack of water, high or low pH, or the presence of substances toxic to microorganisms such as antibiotics, antimicrobials or heavy metals.

LAYERS OUTSIDE THE CELL WALL

A bacterial capsule is a polysaccharide layer that completely envelopes the cell. It is well organized and tightly packed, which explains its resistance to staining under the microscope. The capsule offers protection from a variety of different threats to the cell, such as desiccation, hydrophobic toxic materials (i.e. detergents), and bacterial viruses. The capsule can enhance the ability of bacterial pathogens to cause disease and can provide protection from phagocytosis (engulfment by white blood cells known as phagocytes). Lastly, it can help in attachment to surfaces.

A bacterial slime layer is similar to the capsule in that it is typically composed of polysaccharides and it completely surrounds the cell. It also offers protection from various threats, such as desiccation and antibiotics. It can also allow for adherence to surfaces. So, how does it differ from the capsule? A slime layer is a loose, unorganized layer that is easily stripped from the cell that made it, as opposed to a capsule which integrates firmly around the bacterial cell wall.

STRUCTURES OUTSIDE THE CELL WALL

Fimbriae are thin filamentous appendages that extend from the cell, often in the tens or hundreds. They are composed of pilin proteins and are used by the cell to attach to surfaces. They can be particularly important for pathogenic bacteria, which use them to attach to host tissues.

Pili are very similar to fimbriae in that they are thin filamentous appendages that extend from the cell and are made of pilin proteins. Pili can be used for attachment as well, to both surfaces and host cells, such as the Neisseria gonorrhea.

Pili are typically longer than fimbriae, with only 1-2 present on each cell, but that hardly seems enough to set the two structures apart. It really boils down to the fact that a few specific pili participate in functions beyond attachment. The conjugative pili participate in the process known as conjugation, which allows for the transfer of a small piece of DNA from a donor cell to a recipient cell. The type IV pili play a role in an unusual type of motility known as twitching motility, where a pilus attaches to a solid surface and then contracts, pulling the bacterium forward in a jerky motion.

1. An endospore is a dormant, tough, and non-reproductive structure produced by certain bacteria from the Firmicute phylum.

2. Endospore formation is usually triggered by lack of nutrients, and usually occurs in Gram-positive bacteria.

3. In endospore formation, the bacterium divides within its cell wall. One side then engulfs the other.

4. Endospores enable bacteria to lie dormant for extended periods, even centuries. When the environment becomes more favorable, the endospore can reactivate itself to the vegetative state.

5. Examples of bacteria that can form endospores include Bacillus and Clostridium.

6. The endospore consists of the bacterium’s DNA and part of its cytoplasm, surrounded by a very tough outer coating. Endospores can survive without nutrients. They are resistant to ultraviolet radiation, desiccation, high temperature, extreme freezing and chemical disinfectants. They are commonly found in soil and water, where they may survive for long periods of time. Bacteria produce a single endospore internally.

7. A variety of different microorganisms form "spores" or "cysts", but the endospores of low G+C Gram-positive bacteria are by far the most resistant to harsh conditions.