1) There is a bacterial replication that allows bacteria to reproduce by binary fission and thus there is an exponential increase in the number of cells found in the culture.

2) There is also an orderly growth of all cellular constituents and structures.

3) From the above, we can conclude that there are two types of growth

3.1 Individual growth In which the bacteria reach a fixed size and weight. They grow, reproduce and die. Therefore, it does not affect the growth curve.

3.2 Population growth In which there is an increase of cells as a consequence of cell growth and division. It affects the growth curve. 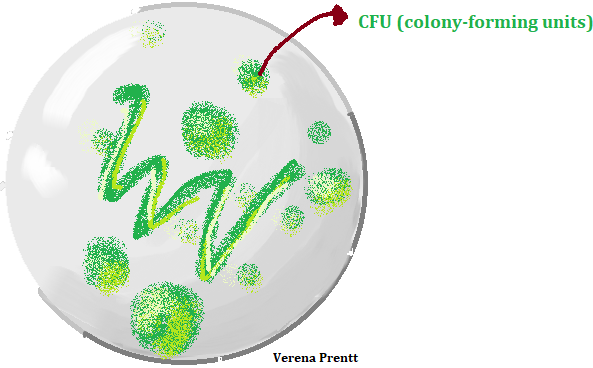 1) The total bacteria count indicates how many microorganisms are present in a sample.

3) Quantifying the bacterial level in the sample can be done in several ways.

3.1 Direct microscopic counts of cells can be done, visually, and by various types of electronic particle counters.

3.2 Viable bacterial counts can be determined by the Standard Plate Count (SPC) method. A sample is diluted several times (serial dilution) and then plated over the agar surface of a petri plate. After incubation the number of colonies on the plate can be counted and are directly related to the number of bacteria in original sample, based on the magnitude of the dilutions. Each colony arises from a single bacterium, or group of bacterium depending on the typical arrangement (tetrad, staph, diplo, etc.) and is referred to as a Colony Forming Unit (CFU).

3.3 Indirect counts of a sample can be performed by using a spectrophotometer and measuring the turbidity (aka absorbance or Optical Density) of the sample. This is called the Turbidimetric method. A standard curve must be created using the known count of a sample, and then counts of various dilutions can be extrapolated.

1.2 Microbes in a sample can be counted by viewing and counting them through a microscope and utilizing a special slide called a Petroff-Hausser counting chamber.

1.3 Blood cells can be counted this way via a hemocytometer (see resource section)

1.4 A known sample volume is placed on the slide and the slide has gridlines marking areas of known volume.

1.5 The marked areas can be evaluated in a particular pattern. Cells are counted in each area and thus a total count for the sample can be calculated

"File:Haemocytometer.jpg" by Dr Graham Beards is licensed under CC BY-SA 4.0 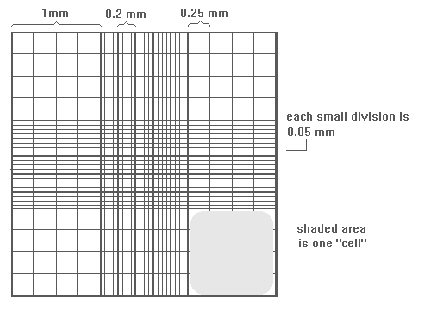 "File:HaemocytometerISSLR.jpg" by Peri Coleman at English Wikibooks is licensed under CC BY-SA 3.0

In the SPC one wants to determine the density of bacteria in a broth sample/specimen of bacteria of unknown density (number of cells/unit volume).

One could take a small sample from the specimen, perhaps 1.0ml or 0.1ml and spread it across a petri dish to count the resulting colonies (remember that each colony is from one bacterial cell or unit).

However, most specimens, based on the turbidity, might have millions of bacteria per ml in the sample. If 1.0ml was plated onto agar the number of bacteria would be so many that it would be impossible to count or even discern individual colonies. Therefore, one must perform a series of dilutions with the specimen to obtain a sample that will produce a plate on which colonies can be counted.

Once one has counted the number of CFU on a plate, that number must be multiplied back by the amount the sample was diluted—the dilution factor.

If 1.0ml is transferred to a 9.0ml dilution tube then the dilution is:

1. At the end of any counting method, the following formulation should be applied to obtain the number of CFU/ml or CFU/g

CFU/ml = No. of colonies per plate x dilution factor / ml of the seeded sample.